Common stocks rocketed higher last week by almost 6%. The entirety of the gain came on Thursday and Friday after the slightly softer inflation numbers were released on Thursday morning. Futures are off by a tiny amount this morning (6 a.m. central) so maybe we will see a few days of digestion in the markets.

The 10 year treasury yield plunged from the 4.15% area to as low as 3.81% on Thursday–bond markets were closed for the Veterans Day Holiday. Of course rates were reacting to the slightly softer inflation figures from Thursday morning. I believe that we will see rates rise somewhat in the coming week as the reality of the inflation numbers being only 1 data point sinks into investors minds–and enthusiasm subsides. At 6 a.m. Monday the 10 year is at 3.89%–up 8 basis points.

The Federal Reserve balance sheet numbers were not released for last week on Friday as is the norm because of the Veterans holiday–we should see the numbers released non Monday.

The average $25/share preferred stock and baby bonds rode a rocket higher on Thursday last week and to a smaller degree on Friday as the average share rose 90 cents. investment grade issues rose 85 cents, banks by 88 cents and mREITs by 99 cents. Shipper rose by a measly 4 cents. 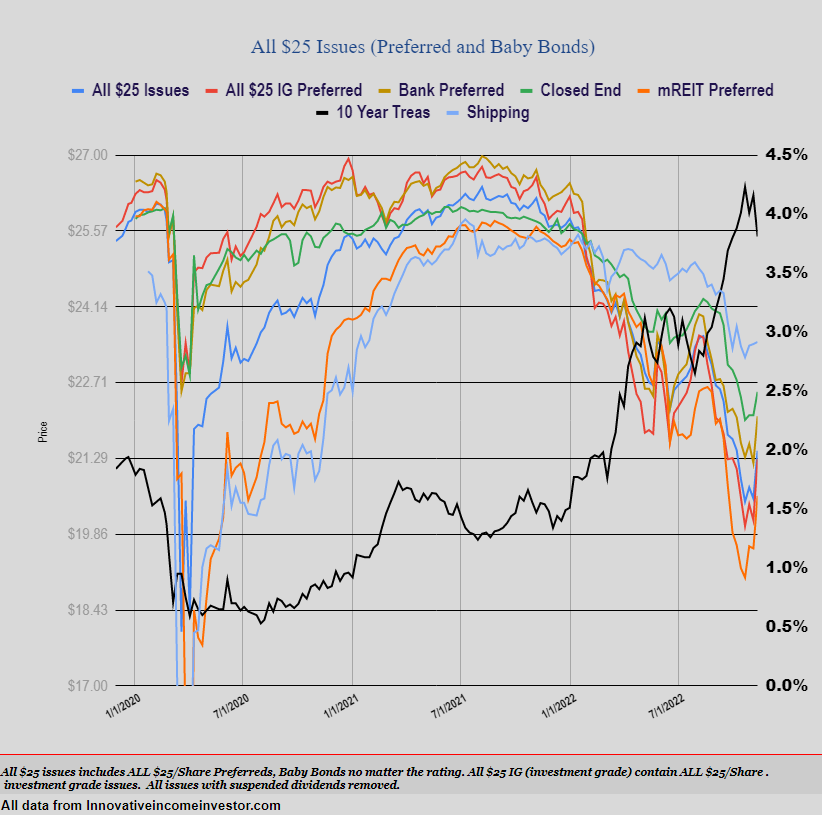 Again last week we had no new issues priced.